The aim of this project is to use the sign language data collected under the BSL Corpus Project, and to conduct an investigation into variation and change in the use of directional verbs in BSL. Directional verbs like ASK or GIVE in BSL move in the signing space between locations associated with the subject and object noun (e.g., the person asking and the person being asked) – see examples below. Because these verbs incorporate an element of pointing within them, they are unique to sign languages, yet the way they are used in everyday conversation is not well understood.

Using data from the BSL Corpus, this project relates the use of directional verbs to different factors involved in their context of use in order to study how they vary. This will help answer questions about linguistic factors such as: To what extent is modification of these verbs obligatory, and to what extent is verb directionality influenced by how often the sign occurs in conversation? (Are verbs that are more frequent more or less likely to be modified for directionality?) What is the role of re eyegaze and constructed action (also known as role shift) with directional verbs? (Compare the eyegaze in SUPERVISE vs. GIVE and HELP below – what factors determine these different eyegaze patterns? With SUPERVISE, is the signer looking to his right because he is imagining the person being supervised? Or because the grammar of BSL requires it?) How often do signs move from or toward the signer (e.g. SUPERVISE and GIVE below) vs. between two locations away from the signer (e.g. HELP below)? This project will also help to answer questions about social factors (such as a signer’s language background, age, or region). For example, is verb directionality more common in some regions than others? Do native signers modify directional verbs more or less often than non-native signers? Do younger signers modify directional verbs more or less often than older signers?

Answers to these questions will help address: (a) theoretical issues related to the relationship between pointing and grammar (a key area of interest within sign language linguistics), (b) the contribution of sign languages to core issues and areas of debate in linguistic theory, such as the relative importance of linguistic diversity and language universals, and (c) the relevance to sign linguistics of an understanding of sociolinguistic variation and change in deaf communities. Furthermore, improved descriptions of the structure and use of BSL together with a greater understanding of linguistic change and sociolinguistic variation will more accurately describe how the language is used by a range of subgroups within the British deaf community which will in turn lead to more appropriate training of sign language teachers, sign language interpreters, and educators of deaf children.

This research is funded by the Secondary Data Analysis Initiative (Economic and Social Research Council, UK). 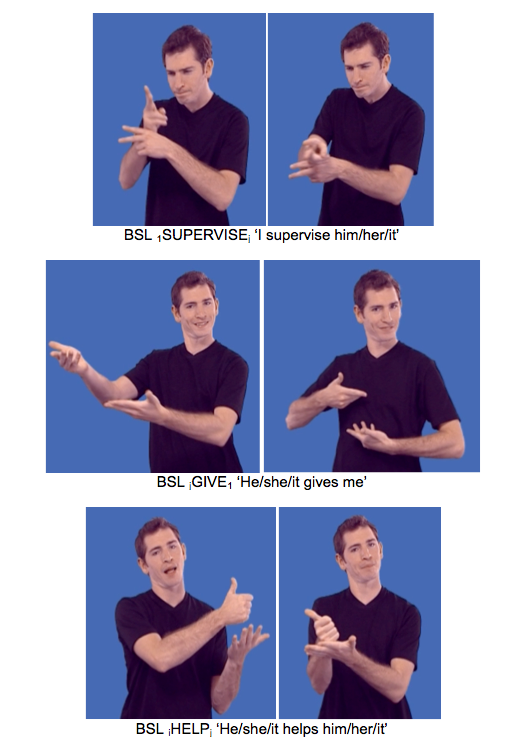